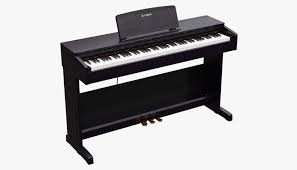 The YDP-103 has improved on the traditional AWM (Advanced Wave Memory) synthesis to deliver real piano sounds.
AWM is a technology that utilizes digital recordings of acoustic instruments, allowing you to enjoy grand piano tone in a relatively small cabinet.
With over a century of experience in building acoustic grand pianos, Yamaha brings that legacy to their digital instruments.


A Graded Hammer Standard (GHS) 88-key piano keyboard provides a heavier touch in the low end and lighter touch in the high end,
and is similar to the hammers inside an acoustic piano. GHS is great for the aspiring pianist,
because practicing with the GHS action builds proper finger technique for playing on an acoustic piano.
Additionally, the matte finish of the black keys makes them less slippery when playing for extended periods of time.

Half-damper pedal control creates more detailed nuance and subtlety when playing, similar to pedaling on a grand piano.
This feature allows for continuously increasing lengths of sustained notes, from slight to full, as the sustain pedal is depressed.

The "Digital Piano Controller" app has an attractive interface optimized for iOS touch screens, and adds a whole new level
of functionality to the YDP-103. You can turn your iOS device into an intuitive instrument controller, allowing you to access
features and settings even more quickly than using the panel of your instrument. Adjust settings, choose Voices, and even record performances.
Once you try it, you'll never want to play without it!